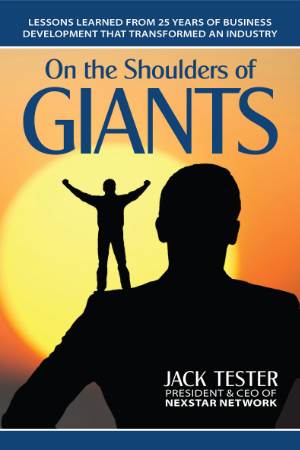 With the 25th anniversary of the organization rapidly approaching, Nexstar Network President and CEO Jack Tester realized that there was no one place where the organization’s deep history and innovative philosophy was articulated. Nexstar is a member-owned organization whose mission is to provide everything the independent residential plumbing, heating, cooling, and electrical contractor needs to succeed.

The mission of On the Shoulders of Giants was to change that. Its goal was to drive home two major messages:

Writing is not a chore for Jack Tester but he realized writing an entire book was a different animal. Jack needed someone who had the ability to keep the project moving so he could get it over the finish line in time to deliver the book by the September 2017 Super Meeting, where it would be distributed in celebration of the 25th anniversary of the organization.

The engagement began with a diagnostic “road map” project to identify and confirm the big idea and quantify what was wanted and needed. We then proceeded to the full engagement, which included big idea development, table of contents, and a series of interviews over a period of six months during which time Helena drew out the information over the phone, assembling it into a draft manuscript, which was then presented to the author for review. Seeing his words assembled into a cohesive manuscript energized the author, who then went through the manuscript to fine-tune it. The author also wanted to include the voices of some Nexstar members and so he solicited stories from them and Helena edited them for clarity and sometimes length. Once the author approved the manuscript, Helena worked with professional editor Candice Fehrman to review it and prepare it for layout.

Helena worked with designer Lori Malkin to arrive at the concept for the cover; Lori also designed the interior of the book.

Helena proposed a 25th anniversary cover for the initial print run (1,000 pieces) and worked with the book designer and printer to achieve this.

Helena collected review quotations from the author and wrote descriptive copy for the back cover as well as the author bio.

Helena created the CreateSpace and Kindle accounts for the author and ensured the files were in the right format and uploaded successfully. The author also wanted to do an audio version of the book so Helena researched and found Davis Sound, a local studio in the Minneapolis/St. Paul area that specializes in recording audiobooks. Jack went to the studio and recorded the book in two sessions, and Davis Sound guided us in creating all the elements required for successful submission of the audiobook to Audible.

The book was published by Nexstar Network and is available on Amazon in paperback ($19.95) as well as in ebook ($9.95) and audiobook formats.