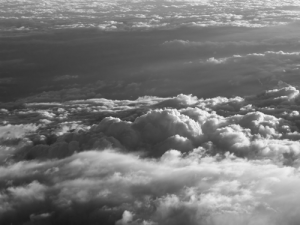 I’m not a pilot but for a time I had an office in a regional airport.

During this immersion in pilot culture (and eau de jet fuel) I learned a thing or two about aviation.

For example, there are two sets of regulations governing the operation of civil aviation aircraft. One is visual flight rules (VFR) and the other is instrument flight rules (IFR).

Flying “VFR” means the pilot flies in weather that allows him to see where the aircraft is going, specifically with visual reference to the ground and by visually avoiding obstructions and other aircraft. When pilots first get their license they are typically qualified to fly VFR only, meaning they can only fly when they can actually see where they are going.

To fly “IFR” requires additional training leading to an Instrument Rating. Under IFR, the pilot flies based on what instruments in the flight deck are telling her and navigates based on electronic signals. Pilots of private jets must be able to fly IFR because at 41,000 feet all they can see out the window is clouds and sky.

For some of us, the experience of navigating toward goals, especially long term goals, is all clouds and sky, all the time.

Time blindness, by the way, is central to the ADHD experience. It’s why appointments are forgotten, projects take longer than estimated, and why hours can feel like minutes to ADHD brain owners.

It’s not that we all don’t want to change this, it’s just that no matter how hard we try, the part of our brains in charge of making these distinctions doesn’t do that well — or at all. The good news is that we can create structures to  help us stay in touch with linear time so we can stay on track with daily goals.

There is plenty of science on ADHD and memory, but it all refers to short term memory. Doesn’t it just makes sense, though, that time blindness would also include difficulty seeing a clear path to the future?

For example, when I  conceive of a goal and draft a five-year plan to achieve it, my brain literally cannot tell me what “five years” means. In fact, my brain understands life about 16 waking hours at a time, max.

The inability to grok time, means time, period. Long and short. And that is where the aviation analogy comes in to play.

I realized that to achieve anything big, I had to start flying life IFR.

For me, that means creating a detailed “flight plan” and navigating from stop to stop, adjusting course based on the signals from my “instruments,” i.e., predetermined key indicators.

Recognizing time blindness and navigating to a pre determined flight plan enables me to stay on course and land at my desired destination on time and intact.

[Special thanks to Ryan Keough from the Wings of Freedom Tour Flight Experience Program (coming soon to a an airport near you) for making sure I got the aviation talk right.]

View all posts by Helena Bouchez »